Note from Mark Timm, CEO Ziglar Family:  I came across a great post recently by author, blogger, and columnist Leslie Anne Tarabella that I knew I had to share with our Ziglar Family community.  In this post, Leslie Anne shares how she and her husband outwitted their stubborn 3-year-old who wasn’t keen on using his manners when greeting people. You’re going to love her sense of humor!

You can  read more by Leslie Anne Tarabella on her blog at: http://leslieannetarabella.com And look for her book, “The Majorettes are Back In Town” being released this November.

Our eldest son was a bit shy, or so we thought, until we discovered he was more accurately stubborn.  When an acquaintance stopped, leaned down, and asked, “What’s your name?” our son stared straight at him with no emotion whatsoever. “Tell Mr. McGibby what your name is,” we coached. Still, our darling little redhead looked straight ahead, mute and in a trance. “Oh, I guess he’s just shy” said our friend, which made our son look relieved. As soon as Mr. McGibby was out of sight, our three year old looked at us with a wry little smile and said, “I say nothing to that man!” It was a statement of triumph and victory, not remorse or shame.

We discovered at that moment our son was on a path of loving extreme control and we were on a path to pulling our hair out. He had skipped the terrible twos, and at three was just starting to exert his baby-control. It was a battle that would last for . . . well, he’s 21 now, so that long. My recent text exchange with him went something like this: “I don’t want to walk in the graduation ceremony.” “Walk, or else we’ll pull you across the stage in a wagon!” “But the cap and gown is going to be so hot!” “We paid extra for a college with air-conditioning. Sign up now.” “Maybe.”

Not ones to be outsmarted by a toddler, my husband and I took charge of the situation by explaining what it meant to have polite conversations. From then on, toddler-boy was expected to look adults in their eyes, smile, and speak kindly. No excuses, no shyness cop-out. We explained it’s okay to be on the quiet side, but not speaking to someone when they address you is rude. Even the shyest of children need to know how to properly greet another person, especially an adult. They may be three years old today, but in the blink of an eye, they’ll be on a job interview.

After we laid down the law, if lil’ guy failed to be polite to adults who spoke to him by at least acknowledging them, we had to have a “practice” when we got home. We’d stand in front of him and pretend to be a person who said, “hello little guy. How are you today?” If he failed to respond acceptably, we’d say, “okay, let’s try again.” We’d role play until he was bored and itching to play with his toys. We made the practice sessions serious, and as dull as possible. Our little student quickly learned he’d better be polite and respectful, or else he’d have to endure “hello lessons” when we got home.

Over the years, I’ve heard countless parents say in front of their children, “Oh, she’s shy, she won’t talk to you.” Or something along the lines of, “He hates to read,” “She can’t carry a tune in a bucket,” or “He never eats anything green.” These kiddies are listening with big ears and turning our statements into excuses and self-fulfilling prophesies.

“We can’t make little Darla Jean keep her clothes on, ha-ha-ha! Look at her go!” Well, precious tootsie takes the statement as permission, so she’s off the hook to act acceptably, and to a child, freedom feels oh-so-great. “Go, Darla Jean, go!”

It wasn’t until our son was in middle school when someone finally told us how polite he was. According to them, He shook their hand and spoke respectfully while looking them in the eye. “Are you sure it was our son?” we asked.

Sure, some children really are naturally shy, but even they need to learn the value of treating others with respect and dignity. Someday they’ll realize that social skills really do come in handy every now and then.

Of course, the way nature works, our next son wouldn’t stop walking up to strangers, shaking their hands and talking their ears off, resulting in us having to give him stranger danger lessons.

Do you have any tried and true strategies for teaching manners to young ones who may or may not be entirely cooperative?  Share your thoughts here! 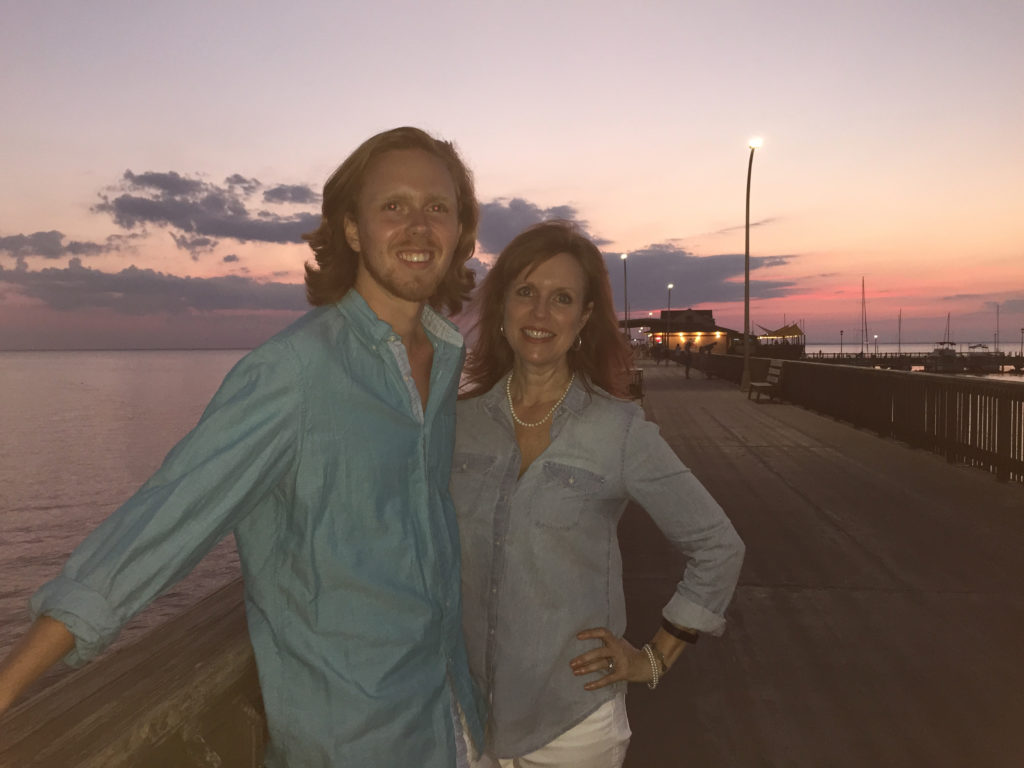 Leslie Anne and her son, all grown up now and willing to properly say hello to strangers.