Her Heart for Service – Life on the Streets(Part 3)

Note from Mark Timm, CEO Ziglar Family: My trip to Africa to help my daughter, Grace, provide shoes to orphans ended in a powerful way.  Before continuing with this story, I invite you to read Part 1 and Part 2 of our adventure.

On the last day of our African adventure, Grace and I were given the opportunity to go and actually see where these orphaned street kids come from, what they do on the street, how they even survive. I was so curious, because I just can’t fathom how a six-year-old child can survive on the streets of Nairobi, much less function well.

Our new friend, Ken, a former street child and current worker with one of the orphanages we visited, told me that all these kids need is food in their belly and they can function. Absent that, many put glue in a Coke bottle that they can sniff to get high, and then they don’t even care if they can function.

We had to see it with our own eyes.

We got up at 4:30 in the morning to meet Ken and his crew to go down to the streets. When we started driving around it was still dark, yet we started seeing kids on the street. We would wake up one of the kids, gently shaking them and then telling them that we brought food and where we were going to be. We did that for about 10 kids, I would say.

Just imagine this: we only woke up 10 kids, but by the time we got to the site to feed them, there were over 100 kids there! Somehow, they tapped into their street network and were able to get the word out that there was food there, so there was an enormous group surrounding the van when we pulled up.

We got out to feed them and started by pouring as much milk as we could out of kettles as cup after cup just came flying in from everywhere. I also handed out bread to these kids that clearly were nearly desperate for it, but it was gone in what felt like moments, even though there were many, many loaves of bread. It was rough.

A couple of the kids could actually speak really good English. One of them was named Carlos, and he was talking to us and sharing. He wore what looked like something a business person would wear, only it was multiple sizes too big. Clearly he had found some clothes somewhere and he’d been wearing them, the only clothes he had.

Sadly, I would say probably half the kids had bottles, like Coke bottles, that had orange glue in them, and they were sniffing that, which kept them high.

The kids also had little family units that looked out for each other. There was one kid named Michael who was in charge of his family unit, and he was keeping an eye on them the whole time he was talking to us. You could tell he was not high. He was actually quite smart and the leader of his group, and he was giving instructions to them.

In fact at one point, we were standing there and he began talking to one of his other kids in his native language, when he suddenly stopped and said, “Oh, I want you to know we’re not talking about you. I’m just telling him where I think we can get potatoes today, and then where we’re going to meet afterwards.”

All that time, he was thinking about where’s that next meal going to come from, and how he would take care of his family unit on the street. 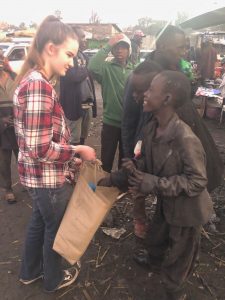 Now we never felt unsafe, but it was uncomfortable at times. At one point, Ken said, “Get in the van; we’ve got to go.” We didn’t argue; we jumped in the van and shut the doors. About that time, a whole new wave of kids came. It was like the word got out that there was food and milk on the street, but we were completely out; we had no more to give to this group of kids who were just showing up. They were hungry and surrounded the van, pressing their faces and their hands up against the windows, so I understand why it was time to go.

It was an unbelievable experience, I’m glad Grace saw it. We saw so many kids in orphanages that had survived the streets, but not all of them do. And some of them who are rescued from the streets end up going back.

I just can’t imagine how they survive out there on their own at the age they did, but they did, and Ken was an example of that. He was rescued at six years old, and he never went back. Now he’s helping run the orphanage that rescued him, which just perfectly demonstrates that anything is possible with God.

With a few hours left to be in Africa, we still had some shoes to give away… I’ll share that story in the 4th and final post in this blog series next week!  Stay tuned!