Today’s post is by Ann Timm, who co-hosts Ziglar Family’s Thrive membership community and the 7-Day Family Challenge with her husband Mark.  She also blogs over at Keeper of the Home, and  — for her most important work — is mom to six awesome teenagers!

Happy Mother’s Day to all of the mamas and grandmas out there!

I hope you’re giving yourself permission to relax and be spoiled by your family for the occasion. I actually like to extend the “mom time” for a few days beyond Sunday — and why not?!

Maybe I should start a “Mother’s Week” movement and get the government to make it official, like Anna Jarvis did for Mother’s Day in 1914!

Even though there are many ancient traditions that could be considered precursors to Mother’s Day, our modern American version didn’t become an official US holiday until 1914, six years after Anna Jarvis came up with the idea as a way to honor the sacrifices that mothers make for their children.

She gained financial support from a Philadelphia department store owner named John Wanamaker in 1908, and she organized the first official Mother’s Day celebrations at both her Methodist church in West Virginia and at an event in one of Wanamaker’s stores that was attended by thousands.

She continued her efforts to have the day added to our national calendar, insisting that current American holidays were biased toward male achievements.

During the course of the next four years, many states, towns, and churches adopted Mother’s Day as an annual holiday, and finally in 1914, President Woodrow Wilson signed a measure officially establishing the second Sunday in May as Mother’s Day.

Here’s where it gets really interesting:

After the holiday became official, florists, card companies, and other merchants capitalized on the popularity of the day, and by 1920, Anna had become completely disgusted with the commercialization of the holiday she’d worked so hard to have recognized.

She began to speak out against Mother’s Day, urging people to stop buying the flowers, cards, and gifts. She even filed lawsuits against groups that used the name “Mother’s Day” and actively lobbied the US government to have it removed from the American holiday calendar!

Can you imagine? I think we’re so used to our holidays being overly commercialized now that I don’t believe anyone would dream of taking up a fight against it!

I do love getting flowers and small tokens from the kids, but I also totally get her frustration; I am not a big fan of the commercialization of a day that is really all about showing the moms and mother-figures in our lives how very much they mean to us, and to accept that love for ourselves as well.

So, in unity with Anna Jarvis, I’d like to share just a few ways that I, along with some special women in my life, appreciate Mother’s Day, and maybe you do, too.

(Dads and kids who are reading this, take note!)

A couple of years ago, I was sitting down with my sweet grandma, Gigi, who at 93 is as sharp as ever and happy to share her thoughts and opinions. I’m pretty much in awe of her, and listening to her share her sweet memories is a treasured gift in and of itself.

Other gifts that stand out from over the years for Gigi also included going out for a dinner so she didn’t have to cook! (Can’t we all relate to that?)

Also, she loves to have help in her garden planting, weeding, and mulching, especially as this has become more difficult over the years for her. She really loves gardening, so this gift of time and service is always special to her.

My own mother, now referred to as ‘Granny’, remembers that her favorite Mother’s Days were those when my big sister and I made her breakfast, and then the family gathered to spend quality time together around the table at her own grandmother’s house.

My mother-in-law is quick each spring to request that her children and grandchildren mulch her yard for Mother’s Day. Brilliant woman! Her whole yard is mulched in an hour and then she serves a meal and has her entire family there to celebrate.

The apple doesn’t fall far from the tree(s) when it comes to how I prefer to spend Mother’s Day.

I don’t need anything fancy; I just want to have a relaxing and love-filled day with my hubs and kids.

Ok, so I won’t turn away breakfast in bed!

But I love going to church as a family, and then just being together with no agenda, no to-do list waiting, and nobody looking at the time with an eye toward the next event. 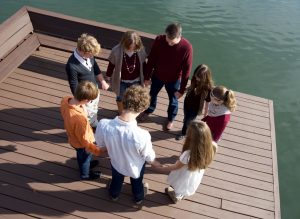 I don’t even mind making the dinner, as long as we are all around the table to enjoy it together! (And as long as they take care of the clean-up!)

I think it’s pretty clear that for most women, we’re pretty easy to please on Mother’s Day. Give us the gift of your time and presence, your love, and maybe a few loving ‘acts of service’ and we’re good to go!

Question: How is Mother’s Day celebrated in your family? If you’re a mom, what do you love most about the day?  Leave a comment below; I’d love to hear your story!